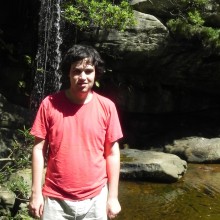 Glen Fletcher was born in Gosford, New South Wales, Australia. Since a young age he showed a keen interest in Science and Computers. As a teenager, he taught himself computer programing and continued to study interesting scientific concepts.

He graduated high school in 2008, and from The University of Technology Sydney in 2012 with a Bachelors Degree in Physics and Nanotechnology, he when on to study Honours in Physics the next year.